Dental Problem Back to Service 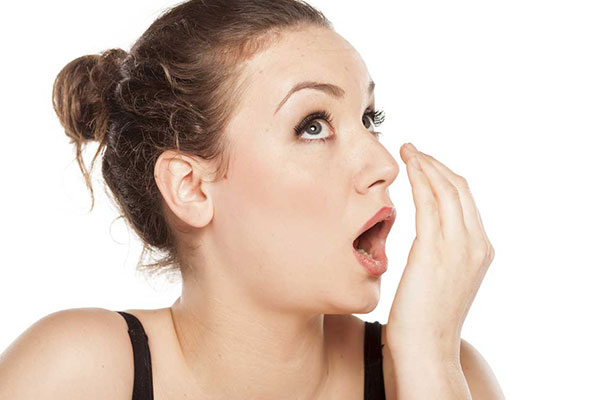 Bad breath is a common affliction with many people. When it advances or doesn't go away, it becomes known as chronic halitosis.

Bad breath is caused by decaying particles of food and bacteria that pass into your bloodstream and to the lungs, where odor is emitted from breathing.

While people spend lots of money on products that treat the symptoms of bad breath, they often neglect to take steps to address the root causes of bad breath-such as bacteria, and decaying food particles remaining in spaces between the teeth, on the gums and on the tongue. In many cases, good daily oral hygiene, including brushing, flossing and rinsing, can keep bad breath in check. This also applies to denture-wearers.
Other conditions, such as gum disease, can cause persistent bad breath. Under normal conditions, your saliva acts to cleanse your mouth of the particles that can decay and later cause bad breath. People with a condition known as dry mouth, in which saliva production is diminished, can sometimes suffer from bad breath. Of course, if you eat certain kinds of food [like garlic and onions], take certain kinds of medications, or smoke cigarettes or cigars, you may also experience symptoms of bad breath.

In some cases, persistent bad breath may be a sign that you have a more serious health problem, including a gastrointestinal, respiratory or sinus problem.

In most cases, over-the-counter mouthwashes and rinses will temporarily freshen breath, but only mask the root cause. The American Dental Association acknowledges the effectiveness of some anti-microbial mouth rinses that are shown to reduce plaque and gingivitis. Good oral health habits can contribute to reducing and eliminating halitosis: brushing and flossing daily as well as regular professional cleanings performed by our office. 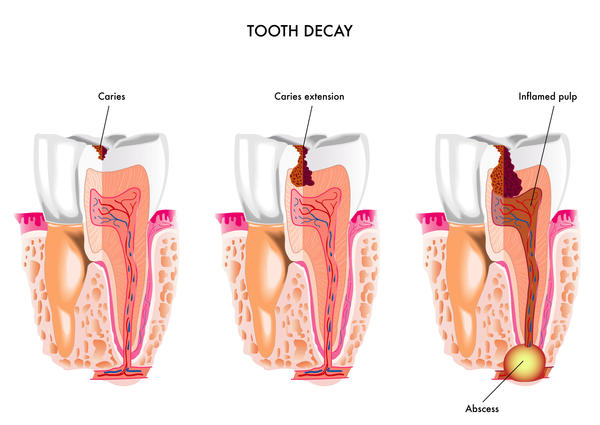 What Is Tooth Decay?
Tooth decay is caused by a variety of things; in medical terms, cavities are called caries, which are caused by long-term destructive forces acting on tooth structures such as enamel and the tooth's inner dentin material.

These destructive forces include frequent exposure to foods rich in sugar and carbohydrates; soda, candy, ice cream-even milk-are the common culprits. Left inside your mouth from non-brushing and flossing, these materials break down quickly, allowing bacteria to do their dirty work in the form of a harmful, colorless sticky substance called plaque.

The plaque works in concert with leftover food particles in your mouth to form harmful acids that destroy enamel and other tooth structures. If cavities aren't treated early enough, they can lead to more serious problems requiring treatments such as root canal therapy.

The best defense against cavities is good oral hygiene, including brushing with a fluoride toothpaste, flossing and rinsing. Your body's own saliva is also an excellent cavity fighter, because it contains special chemicals that rinse away many harmful materials. Chewing a good sugarless gum will stimulate saliva production between brushing.

Special sealants and varnishes can also be applied to stave off cavities from forming.

If you have any of the following symptoms, you may have a cavity: 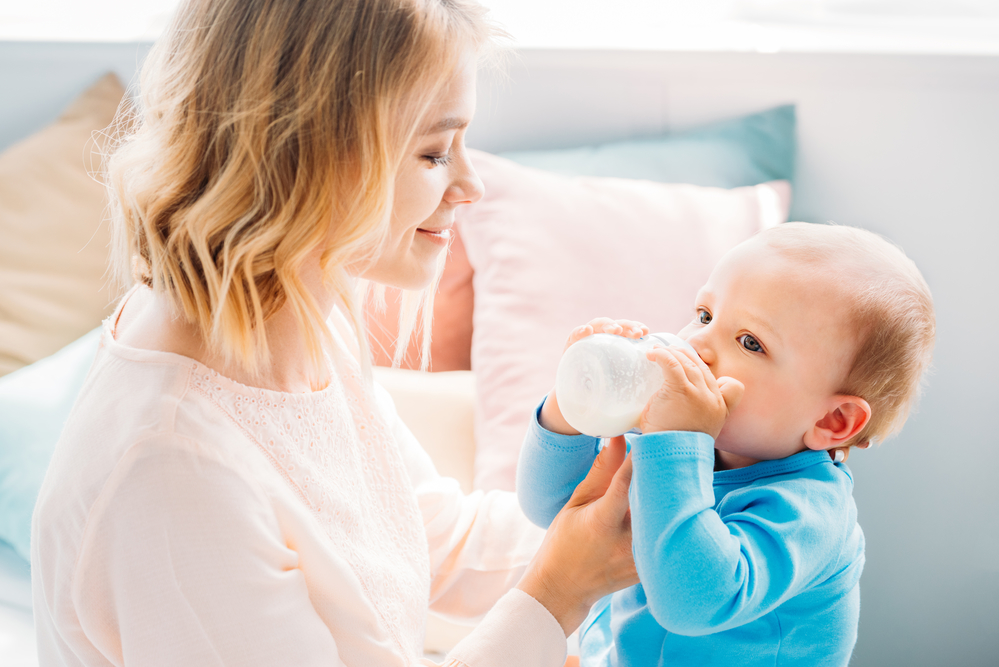 Baby bottle tooth decay is caused by sugary substances in breast milk and some juices, which combine with saliva to form pools inside the baby's mouth.

If left untreated, this can lead to premature decay of your baby's future primary teeth, which can later hamper the proper formation of permanent teeth.

Gingivitis is the medical term for early gum disease, or periodontal disease. In general, gum disease can be caused by long-term exposure to plaque, the sticky but colorless film on teeth that forms after eating or sleeping.

Gum disease originates in the gums, where infections form from harmful bacteria and other materials left behind from eating. Early warning signs include chronic bad breath, tender or painful swollen gums and minor bleeding after brushing or flossing. In many cases, however, gingivitis can go unnoticed. The infections can eventually

cause the gums to separate from the teeth, creating even greater opportunities for infection and decay.

Although gum disease is the major cause of tooth loss in adults, in many cases it is avoidable.

If gingivitis goes untreated, more serious problems such as abscesses, bone loss or periodontitis can occur.

Periodontitis is treated in a number of ways. One method, called root planing, involved cleaning and scraping below the gum line to smooth the roots. If effective, this procedure helps the gums reattach themselves to the tooth structure.

Pregnancy has also been known to cause a form of gingivitis. This has been linked to hormonal changes in the woman's body that promote plaque production.

Teeth grinding, also called bruxism, is often viewed as a harmless, though annoying, habit. Some people develop bruxism from an inability to deal with stress or anxiety.

However, teeth grinding can literally transform your bite relationship and worse, severely damage your teeth and jaws over long periods of time.

Teeth grinding can cause abrasion to the chewing surfaces of your teeth. This abnormal wear and tear will prematurely age and loosen your teeth, and open them to problems such as hypersensitivity [from the small cracks that form, exposing your dentin.] Bruxism can also lead to chronic jaw and facial pain, as well as headaches.

If no one has told you that you grind your teeth, here are a few clues that you may suffer from bruxism: Bruxism is somewhat treatable. A common therapy involves use of a special appliance worn while sleeping. Less intrusive, though just as effective methods could involve biofeedback, and behavior modification, such as tongue exercises and learning how to properly align your tongue, teeth and lips.

Wisdom teeth are the third and final set of molars that erupt in the back corners of the upper and lower normal adult mouth. Unfortunately, most people experience problems from wisdom teeth; in most cases, this is because the teeth erupt too close to existing permanent teeth, causing crowding, improper bites, and other problems.

If wisdom teeth are causing a problem and are not pulled, they can sometimes become impacted. Impacted wisdom teeth can be extremely painful, as well as harmful to your oral health. Symptoms are easy to spot: pain, inflammation, and some kinds of infections.

Many people need to have their wisdom teeth extracted to avoid future serious problems. In general, the lack of the four wisdom teeth does not hamper one's ability to properly bite down, speak or eat. 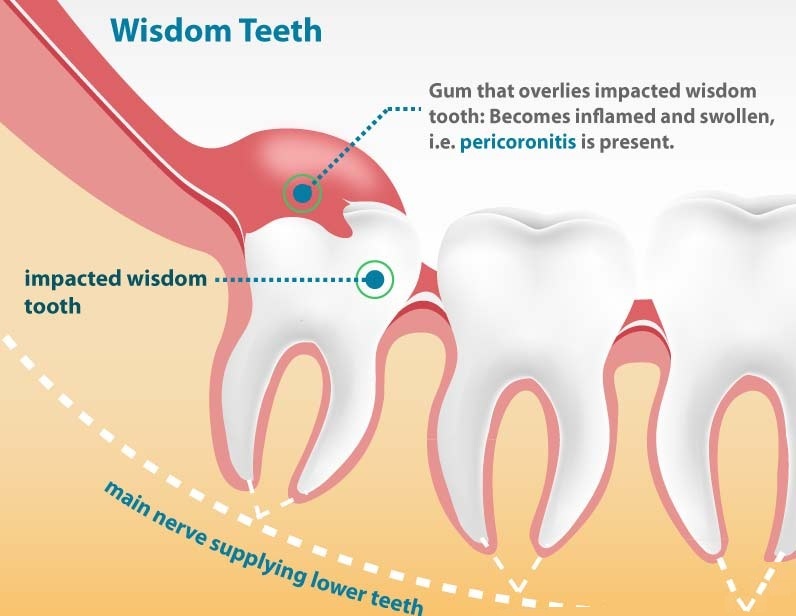